So....my sister is due to have her baby in December and she has asked me to make her a birthing gown so that she wouldn't have to deal with the hospital gowns. I don't blame her, I'm not a fan of them myself. I had enough of an issue when I was getting foot surgery done, I can't imagine trying to have a baby in one of those. I've sewn two skirts before but have never done a full dress so it was definitely a new experience. Some parts were frustrating, some parts were much easier than I thought. And I have to say, I absolutely love my sewing machine. It had the perfect stitch for this stretchy fabric and made life soooooo much easier!

Rather than just being something to wear while in the hospital, she requested that this dress be modified so that she could comfortably wearing it as a nursing gown and whenever she wanted to wear something comfortable around the house. So! Here are the finalized results. Remember, this is my first attempt at making a gown so it will look a bit rough.

Final look (Forgive the mannequin, it's a little small for the dress): 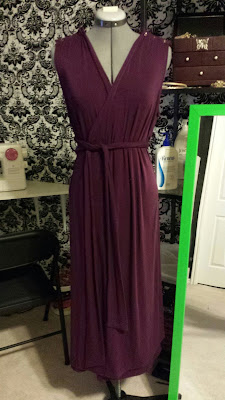 The pattern that was used to make the dress was Butterick B5860, the wrap-around dress. And forgive the mirror, I probably should have moved that out of the shot. *facepalm*
The fabric that was used is a stretchy knit fabric and I found, after cutting out the panels, that there is indeed a right side and a wrong side of the fabric. The color just looks so close that it is hard to tell. xP I

To make it easier to nurse, rather than sewing the shoulder straps together I added snaps to connect them: 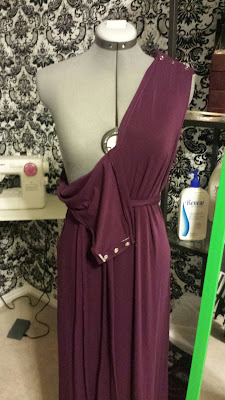 There are snaps on both shoulders to make it easy to switch sides when it comes to nursing. I used the simple metal snaps and reinforced the edges to reduce any sort of pulling on the stretchy material. The area itself doesn't stretch and the snaps are (thankfully) easy to snap and unsnap. Also, since this is a wrap-around dress, if you don't want to mess with the snaps then adjusting the fabric to allow breastfeeding is also easy to do!


Here is a close-sup shot of the snaps that I used, a little bit of the interfacing is sticking out so you can see the reinforcement: 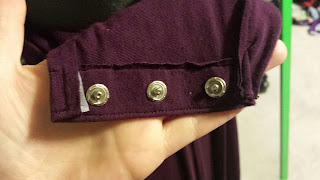 And now for the back: 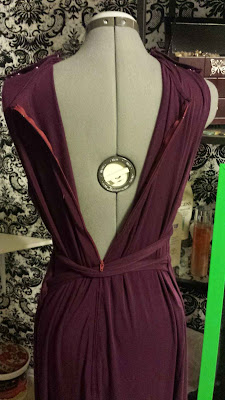 In the case of needing to get access to the back for an epidural, I've included a zipper. It's a 22" zipper that is set low enough that it'll open all the way down to the end of the tailbone. Above the zipper, there are two hook-and-eye pieces to hold the two sides together. That way, when the zipper is undone, you've still got a little something holding the back together!

For a first attempt, I'd have to say that it wasn't a complete failure. There are definitely some things that I'd do a bit differently if I was asked to do it again but overall, it was a fun project. I will not lie though, I am honestly glad to be done with it.
Posted by Millie at 10:25 AM